Have the combination of lockdown and January blues got you dreaming of a Mediterranean escape? Are you longing to sit outside a taverna in the shade, glass of wine in hand, listening to the waves break on the shore? Those times will come again, in the meantime discover our top five facts about Greek cuisine, plus a delicious recipe for stuffed vegetables that you can easily make at home.

It’s all about olive oil

Did you know that it was probably the Ancient Greeks who first planted olive trees around the Mediterranean, including eastern Spain, southern France, and southern Italy? Today Greece is one of the top five producers of olive oil in the world, but consumes the most per capita of any country in the world, even more than in Spain and Italy. Greek food uses lashings of olive oil in everything, giving it a wonderful subtle flavour and silky texture (not greasy, it is used more as a condiment than for cooking).

A little meat and a lot of veg

Many people associate Greek food with tender, succulent lamb dishes like souvlaki (lamb skewers) and kleftiko (slow cooked lamb) or tangy sheep's cheese like feta. Due to the arid climate and rocky terrain, it was much easier to graze sheep and goats than cattle, and so most traditional Greek meat dishes and dairy products are produced from them.

Pork, poultry, rabbit and seafood were (and still are) also used, though until fairly recently meat was not a staple in the Greek diet, being used only at special occasions. That’s why there are plenty of vegetarian options on offer on Greek menus. 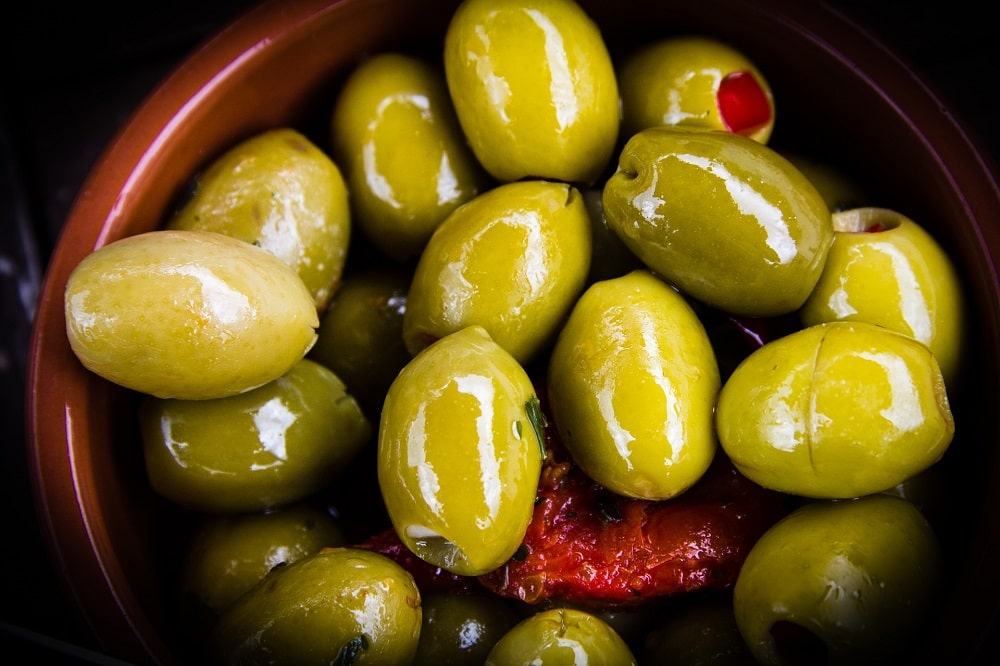 Alongside the trifecta of Mediterranean foods – bread, wine and olive oil, Greece shares other characteristics with southern European countries like Italy and Spain, including the importance of the dinner table. Greeks eat their main meal of the day at lunchtime, usually around 2pm, and don’t usually eat dinner until around 9-10pm, later than the Italians but slightly earlier than the Spanish. Don’t even think about eating early as most restaurants don’t open until 7pm.

As with most famous cuisines, Greek food is full of outside influences, especially its neighbour Turkey. Along with much of the Balkans and south-eastern Europe, most of Greece was part of the Ottoman Empire for 300 years until the early 1800s. As a result, many of the dishes you find in modern Greece (stuffed vine leaves, tzatziki, and many more) you will also find in Turkey, albeit with a slight twist and a slightly different name. Where each dish originated is difficult to say, though it seems that sweets like baklava, popular in both countries, probably came from Turkey, with strong influences from the middle east.

Having a smashing time

This ancient custom associated with celebration is thought to have started as a way of expressing grief, symbolically killing the plates used at feasts to commemorate the dead, and gradually became used at other feasts too such as weddings. Others maintain that the noise was used to keep away evil spirits, or even as a way of vaunting one’s wealth as you could afford to replace it. In any case the practise is nowadays only really used in touristy restaurants in Greece and around the world, using unglazed plaster plates that are cheaper and safer. In Greece it is more common to see people throwing flowers instead.

If you love travelling and cooking, why not combine the two on this fantastic Greek cookery course in Zante, learn to make mouthwatering Greek dishes, explore the island with your friendly hosts, and soak up the sun on the beach in your downtime:

No time for a trip to Greece? 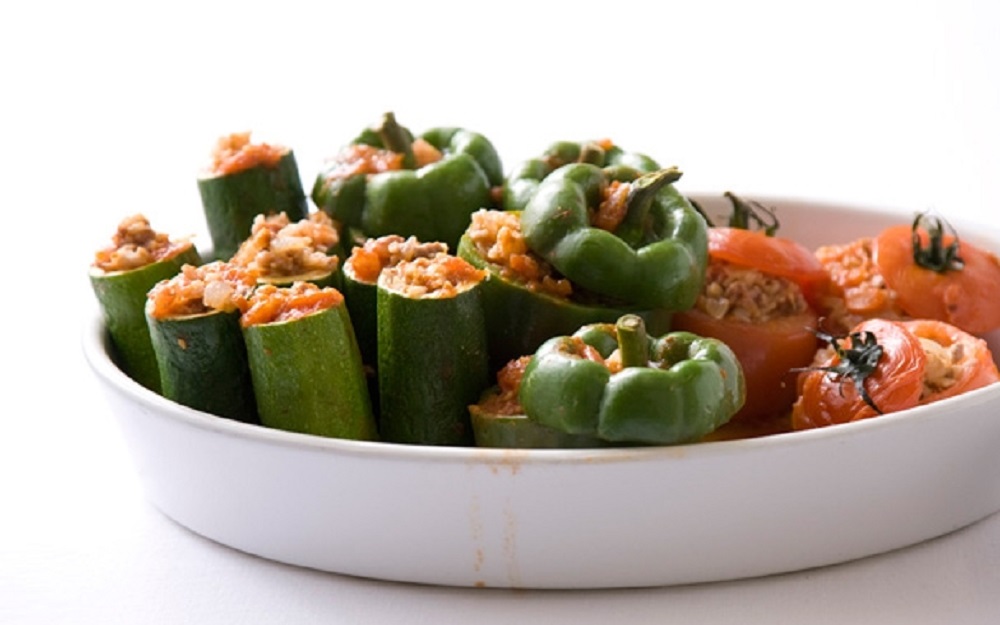 2. Start by preparing the vegetables for stuffing. Cut the tops of the vegetables but don’t take them completely off, so that you create lids, then scoop out the flesh and seeds from the vegetables using spoons. Save the inside of the tomatoes, and aubergines into separate bowls and use a food processor to finely grate them but separately.

3. In a pan heat some olive oil, add the onion and 6 cloves of garlic (grated), the grated aubergine, tomato, chop up the parsley and the fresh mint and add it as well, salt and pepper. Later, add a cup of water and the rice and let it cook until rice is semi-cooked.

4. Remove the pan from the fire add the cheese cut in small cubes and give the mixture a good mix. Try with the spoon and adjust the salt and pepper if needed.

5. Time to stuff the veggies!! Arrange all the vegetable shells on a roasting tin and spoon the rice mixture into them. Place the lids on the vegetables, you may use toothpicks to secure them and place the potatoes cut in quarters in between the gaps and drizzle them with some oregano.

6. If there is any remaining rice mixture, pour it over the vegetables, add a cup of olive oil to the roasting tin and the remaining of the garlic, and bake for about an hour and a half at medium heat.

Let us know how you get on in the comments!

5 reasons to go on a cooking holiday

Everything you need to know about wine tasting in Bordeaux