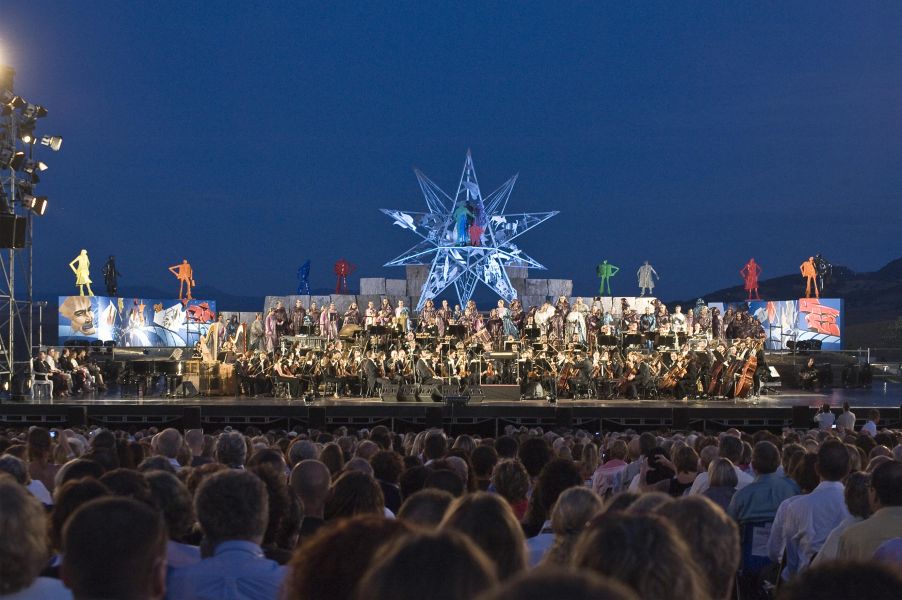 Andrea Bocelli Tour - A Look Back

Andrea Bocelli’s big break came when his demo tape landed in the hands of Luciano Pavarotti in 1992. He was chosen to sing “Miserere” with Pavarotti, and the rest is history.  In 1997 he recorded “Time to Say Goodbye” with Sarah Brightman; a song now widely famous.  The song sold over 12 million copies, making it one of the best-selling singles of all time.  In 1999 he became the first artist to hold the top three spots on the US classical album charts in November 1999, and his career went from strength to strength.

Bocelli’s 2013 album included collaborations with Jennifer Lopez and Nelly Furtado; two mainstream pop princesses. He frequently records duets with pop artists, including Ariana Grande, Nicole Scherzinger and most recently Ed Sheeran (see below) which have gained a great deal of mainstream coverage and expanded his audience.  He even performed at the Leicester City premier league celebrations in 2016 for his friend Claudio Ranieri.

Every year since 2006, Bocelli has performed a special concert at the outdoor Teatro del Silenzio in his hometown of Lajatico, Tuscany.   Each year's show is unique, usually the tenor performs his favourite operatic arias, and some of his own hit songs, occasionally joined by stars of the bel canto or one of the many pop/rock stars he has colloaborated with over his long career; while every 2-3 years he goes back to his roots, performing in a full opera of his choice.

At the inaugural concert of the Teatro del Silenzio, Bocelli was accompanied in performances by Paola Sanguinetti, who has had title roles in many operas, and Gianfranco Montresor, a well renowned baritone. The chorus was sung by Pisana, the Italian Philharmonic Orchestra performed the music and Marcello Rota conducted.

For 2009, eight sculptures, by Hans Peter Ditzler, were placed at the theatre. Among Bocelli's guests were opera legend Plácido Domingo, with whom he sang Nessun Dorma from Puccini's Turandot and a duet from The Pearl Fishers. Welsh singer Katherine Jenkins, was also included in the line-up, together they performed "Time to Say Goodbye".

Sculptures by Swiss artist Kurt Laurenz Metzler, who attended the concert, were exhibited during the 2010 edition of the concert. Italian actress Gina Lollobrigida, who was also in attendance, donated a Bronze statue she had made of Bocelli, to the city of Lajatico.  This year the attendance of the concert doubled to 10,000 guests. Including one of the two surviving member of The Three Tenors, Spanish Catalan tenor, José Carreras, and Italian rock singer, Zucchero.

He was also awarded the Pisano Doc, during the dress rehearsal for the concert, July 24, "in recognition for a great citizen, who with his extraordinary art and his humanity brings great prestige, honour and respect to the city of Pisa."

The 2013 performance included a cover of "Love Me Tender" initially performed by Elvis Presley and Italian renditions of Frank Sinatra's "My Way" and Edith Piaf's "La Vie en Rose". Guests included tenor Riccardo Cocciante. In what has become tradition, Andrea Bocelli performed "Time to Say Goodbye" at the end of the concert.

This year's show was called "Le Cirque" and was made up of the world's most famous opera arias and some pop songs, with a spellbinding circus themed stage show of vibrant colours and backdrops.

Last year's show was a full opera - Andre Chénier by Umberto Giordano, held on two dates, 28th and 30th July.  If you don't know it there is a very good introduction to it by Opera North - Andrea Chénier in a nutshell.

This year's show is called Ali di libertà based around the theme of flight, and promises to be a spectacular show, the first to be televised.

If you would like to attend then take a look at our Andrea Bocelli ticket & hotel packages, all of which include accommodation, tickets and return transfers to/from the venue.

Each package can be tailor made to suit your requirements, so drop us a line at [email protected] to find out more (please send us an e-mail, don't enquire in the comments).

Hi all,
I am Australian and have been a fan of Andrea for many years. I am planning to visit Italy when I retire in 2021 so I hope Andrea is still performing the concert Teatro del Silenzio in 3 years time.
This is my dream.
Kind thoughts and wishes,
Rhonda